END_OF_DOCUMENT_TOKEN_TO_BE_REPLACED

Today’s newsletter is the first in a series of “Behind the Scenes” considerations when hiring a machine shop. This series will focus on important aspects to think about when choosing the right shop for a specific project. Included are some of the finer details of machine tooling that might not show up in the black and white pages of an RFP, but may make all the difference in part production.

Today’s subject is a machine called the Harmonizer that uses acoustics to offset machine “chatter,” resulting in optimized metal removal rates. The technology is not new to Protomatic, but it emphasizes the leading edge equipment employed during production.

Experienced machinists have an innate feel for the metallurgy that they are cutting and for the machine they are using. However, no matter how experienced a machinist may be, there are some metal cutting conditions that baffle even the best.  Sometimes a harmonic is set up between the machine, the part fixture and the cutting tool which interferes with process control. The problem may result in poor micro finish, tolerance control or tool life.

Chatter is a common phenomenon and  is described in our industry as self-excited vibration that is non-linear, caused by too much gain (depth of cut) at a given RPM for the given tool stack-up (tool/holder/spindle/machine). It is prevalent with high-speed spindles, longer tools, higher depth of cuts, and hard materials.

Typically, the machinist would slow the machine down until the chatter disappears. However, that increases cycle time, which increases the cost of the part.

To address chatter and optimize metal removal rates, Protomatic machinists use an acoustical analysis system called “The Harmonizer” to determine the “sweet” spot for optimizing the depth of cut of the cutter, the rigidity of the part in the fixture and the spindle speed. Follow this link for more details about this technology.

The chatter diagram, developed by using accelerometers on the parts, fixtures and machine and tuned hammers with sophisticated software identifies stable and unstable machining setups for specific metal removal rates and spindle speeds. The red areas are chatter zones and must be avoided or the tools will shatter.

Acoustically, the Harmonizer picks up the most subtle of abnormal vibrations and reports it to the machinist.

With this insight, our machinists can adjust the spindle speeds to increase the metal removal rate until they find a “sweet spot”.

In the following case, this technology was able to reduce the cutting time from about 3 minutes to less than 1. This also gives us better control of the finish and tolerances. 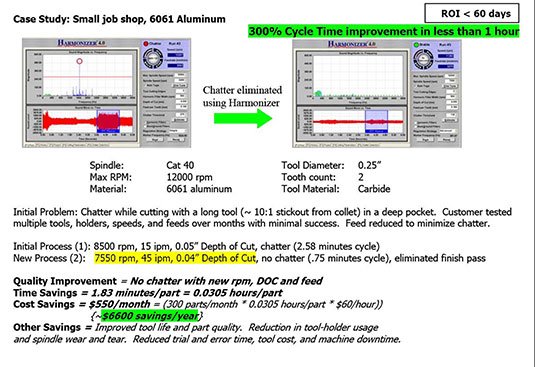 In the following case, this technology reduced the cutting time needed on a part that required substantial metal removal from the billet stock. Frequently, Protomatic is machining from billet stock and is required to quickly remove more than 70% of the material before getting into the fine, close tolerance machining phase. 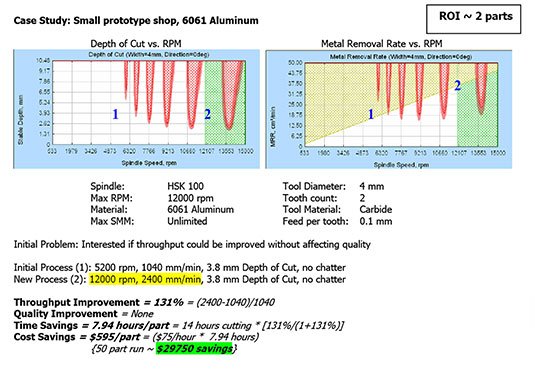 In light of customer confidentiality, these examples are from the supplier’s website and not from Protomatic’s process archives.

With this cutting technology, Protomatic is a prototype-to-production supplier that stays on the leading edge of metal cutting. Protomatic prides itself on its “Life-Saving Precision” culture and enjoy sharing its knowledge.